The husband-wife team of David Walton and Majandra Delfino will play the leading roles in the independent comedy “Later Days,” Variety has learned exclusively.

Production will start in Chicago on Sept. 9. Walton will play a frustrated stay-at-home dad who invites all of his high school friends to a 80s-themed surprise party for his exhausted corporate wife for her 40th birthday. David Pasquesi will co-star as a once-famous DJ who is now broke.

The film is co-written and will be co-directed by Brad Riddell and Sandy Sternshein. Riddell and Sternshein are co-owners and partners in the production company Wry Mash Media. Financiers Paul Hubbard, and The Chicago Media Angels will both serve as executive producers.

PAM (40) is close to finishing a huge deal that will define her career. All she wants for her birthday is a nice meal, sexy time with her husband, MIKE, and then to get back to work. Too bad Mike didn’t get the memo. He throws a huge 80s-themed Prom Party for Pam and EVERYBODY from high school comes – in costume, and with all of their old crushes, grudges, and nostalgic baggage. Basically, it’s Fireball shots, 80s music, an amateur MMA fight, bathroom sex, divorce, a toilet-papering mission, jail, a celebrity encounter, and then donuts. Pretty much in that order. LATER DAYS is a date-night romp for exhausted adults about the reckoning between who we are now, who we once were, and what we still aspire to be. By the end of this one wild night, Mike and Pam break out of a marital funk, and the whole gang sees the past and the future more clearly — through bleary, blood-shot eyes. 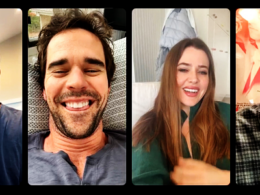